About the Montague Soapbox Race

The hill at Unity Park, starting at the corner of 1st Street and Maple Street (see map below), is a steep hill, dropping 60 feet in the first 300 feet of road (about 1/20th of a mile), with a long left curve at the bottom.

Adult Racers could reach 35 MPH from starting ramps at the top of the hill, which are four feet high in the back and twelve feet long. The total adult run is about 1/3rd of a mile, with fastest times being under 30 seconds.

Racers will get two qualifying heats each, and go down the hill two at a time, side by side. No lane changing. Drifting out of your lane, across the line, will result in a 5 second penalty. Because of the single left turn on the hill, each racer will take the left lane on one heat and the right lane on their other heat, with the combined time from the two heats being used as their final total.

Only "Adult Racers" who are 20+ will race from the top, optionally on the ramps. Teens will also start at the top of the hill, but not on the ramps. Kid Racers will start farther down the hill, at points based on their age group. 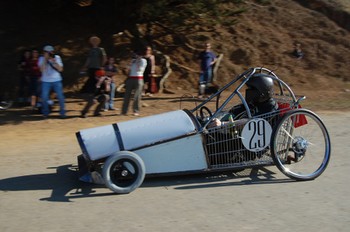 The fastest three in each group will win a trophy cup.

Racers will also be judged by creativity. The more flambouyant, the better. Costumes and soundtracks are encouraged. But please, no capes!

Carts driven by Adult Racers need to be fairly robust seeing as how the cart must be able to support their heavier weight due to the bump of the starting ramp at the top (22.5 degree slope) and the at higher speeds after the left turn without collapsing or steering them into the hay bales. Younger drivers will have it easier, though there will still be an element of skill required.

Everyone is encouraged to visit the hill prior to the race to check it out, and perhaps ride down the hill on a bicycle. There will be NO practice date, as the insurance and extra set-up will be proihibitive. Racers may use their own descretion as to whether they want to put their carts through any trial runs on hills near their homes. Soapbox carts, while technically "street legal" and in the same class as a bicycle, can be a danger to motor vehicles due to poor visibility and cart construction. If you do intend to test your vehicle, you should have at least two spotters to watch for other vehicles. Neither the Montague Soapbox Race committee nor parent organization Montague Parks and Recreation endorse the idea of organized trial runs.